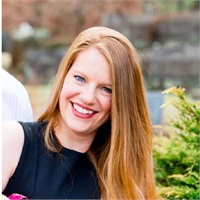 Mrs. Fortin has been a licensed independent insurance agent since 2012. She became a Public Notary in February 2016. Sarah has also worked as an administrative assistant in the field of psychology and the financial services industry. She also was an early childhood teacher in North College Hill, OH and in Independence, Kentucky.

Mrs. Fortin graduated from Miami University in 2006 with a Bachelors of Science.  She was a caddy at the Clovernook Country Club from 2000-2003, and was awarded the Evans Scholarship. Mrs. Fortin was born and raised in Cincinnati, OH and attended McAuley High School.  Sarah was an active volunteer for organizations such as the Greater Cincinnati Earth Coalition. She now dedicates her volunteer time with the Germania Society in Fairfield, the Sycamore Township Civic Association, and St. Gertrude School in Maderia.

Sarah met Standish Fortin in 2004. They were married in 2011, and they now have three children, Gretchen, Brude, and Ingrid. In her “spare” time, she enjoys cooking, reading, and watching sports.